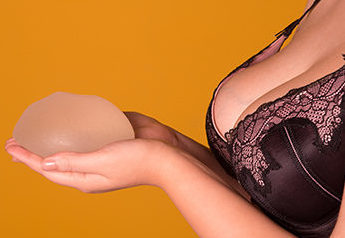 Dr. Kim will tell you at a breast augmentation surgery consult that choosing a breast implant is a very personal decision, and there are many things to consider including implant shape. Dr. Kim will also explain the risk and rewards of using one implant or another. This month the Plastic and Reconstructive Surgery Journal published a paper by Dr. Hidalgo and colleagues “Intraoperative Comparison of Anatomical versus Round Implants in Breast Augmentation,” which tackles the question of whether it matters if a patient chooses round or anatomic shaped breast implants.

In 2012 anatomic implants were approved by the FDA and there has been significant research performed to determine their safety and efficacy. This research has shown that shaped implants are associated with a higher risk of malrotation, an association with anaplastic large-cell lymphoma, and there a significantly lower risk for capsular contracture (Canady, Hidalgo 2017, Hidalgo 2016). The three largest breast implant companies have created their own shaped implants as seen in Figure 1. In a nine-year Sientra core study, the researchers found that a large reason for reoperation was for cosmetic reasons, suggesting that an implant that promises a more natural and superior aesthetic result would significantly improve patient satisfaction and reduce the rate of reoperation (Stevens).

There are risks to using round implants and shaped implants but the question Dr. Hidalgo and colleagues were trying to answer was whether or not shaped implants were aesthetically superior to round implants, if it was possible to determine the difference between the two, and therefore if suggesting that an aesthetically superior result is relevant when making decisions about choosing implant shape. In order to answer the question surgeons and lay-people were surveyed and asked to rank the aesthetic outcome of different breasts and determine whether a shaped or a round implant was used. 43.6% of the surgeon’s cohort and 29.2% of the lay-person’s cohort reported no observable difference between shaped and round implants. The shaped implant was ranked as superior in 51.1% of cases by surgeons, and in 46.7% of cases by lay-persons.

These results support the findings of a 2015 study published in the Aesthetic Surgery Journal, by Dr. Al-Ajam and colleagues who had surgeons rate the aesthetic outcome of breast augmentations and determine whether they could determine if the patient had round or shaped implants. They found that anatomic implants scored slightly higher than round implants but not to a degree of any statistical significance.

These results are also in line with the results of Dr. Rubi’s study “Comparing Round and Anatomically Shaped Implants in Augmentation Mammaplasty: The Experts’ Ability to Differentiate the Type of Implant,” published in the Plastic and Reconstructive Surgery Journal. This study asked surgeons and surgical nurses to determine whether or not a given patient had round or shaped implants and they found that 50.3% of the responses were correct, which is no better than if they had simply guessed.

Although the data seems compelling, these types of studies are generating information based on an average patient not an individual. These studies will offer information about the average experience with a given implant in a patient population described by their average age and BMI. When choosing an implant for breast augmentation talk with Dr. Kim to determine which implant shape is best for you based on your unique features.