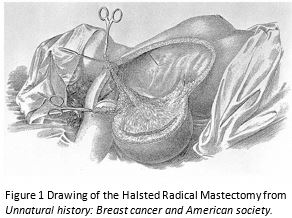 Treatment of breast cancer has evolved dramatically from the late 19th century with the scarred and deformed breasts iconic of the Halstedian radical mastectomy1. His technique, Figure 1, involved not only removing the breast tissue, but also the axillary lymph nodes, pectoralis major and minor, latissimus dorsi, serratus, subscapularis, and teres minor1. The results of this surgery often left women with sunken chests, medially rotated shoulders, and general weakness from the removal of all the muscle1. This was the gold standard in treatment, because of the belief that cancer spread in concentric circles and by removing more of the breast tissue they were more likely to prevent recurrence1.

Some surgeons found that although the surgery had become more radical the patients didn’t have substantially higher survival rates1. Nevertheless, the radical mastectomy was the primary means to treat breast cancer with surgery until the introduction of the modified radical mastectomy by Patey and Dyson2. And it wasn’t until the mid to late twentieth century when silicone gel implants and tissue expanders entered onto the scene1. Now breast cancer patients had the opportunity to not only remove their cancer, but also rebuild their chest with the help of a plastic surgeon. Surgical management of breast cancer is now reliant not only upon patient safety, oncologic safety, but also cosmetic preference.

Although there have been tremendous advances in the treatment of breast cancer, surgery remains the mainstay of treatment3. Nipple sparing mastectomy has been shown to be an oncologically safe procedure for carefully selected patients4-6. Patient characteristics are strongly considered before proposing the NSM. Patients who smoke, have large ptotic breasts, or are planning radiation treatment will be at a higher risk for necrosis or nipple malposition3,7. For those who qualify for the procedure they will be at risk for the same complications as those who have the skin sparing mastectomy, such as infections, seroma, and capsular contracture,; but they have a higher risk of necrosis7. Although there is a higher chance of necrosis, the risk may balanced by the aesthetic and psychological benefit of keeping the nipple.

Being diagnosed with breast cancer, or a predisposition to getting cancer, such as the BRCA gene, can cause large amounts of stress. For some patients, being able to preserve the nipple during the breast reconstruction leads to a greater satisfaction of the final outcome 8. Nipple sparing mastectomy allows for an aesthetically superior reconstructive result due to the preservation of the nipple areolar complex 9,10. The position and shape of the nipple has a strong influence on the appearance of the breast, so through NSM part of the aesthetic of the breast can be maintained 11,12.

In a study that sent questionnaires to 310 women, those who received a NSM were able to cope significantly better with the changes in their body, maintain a feeling of femininity, and had much higher self-esteem13. These women overwhelmingly wrote that if they had lost their nipple, they regretted the loss and if they had kept the nipple they were happy with their choice 13. The benefits of Nipple Sparing Mastectomy for patient satisfaction of appearance and psychological adjustment have contributed to the two fold increase of this procedure from 2005 to 2009, and the increase in rate from 2.9 to 8% between 2010 and 2013 14-17.